An emotional day for the Niçois. For 85 years the legendary Stade du Ray had been at the heart of the society, witnessing the ups and downs of the popular local football team OGC Nice. Today, inevitably, would be the last hurrah before we turn our attention to the modern Allianz Riviera. The people’s appreciation of this beloved stadium was demonstrated by thousands of Niçois who gathered at Place Masséna, forming a sea of Red and Black, and then, in the searing heat of summer, marched northward to the Ray almost 6km away. Today’s game against Montpellier HSC would conclude the long, emotional story of the Ray. 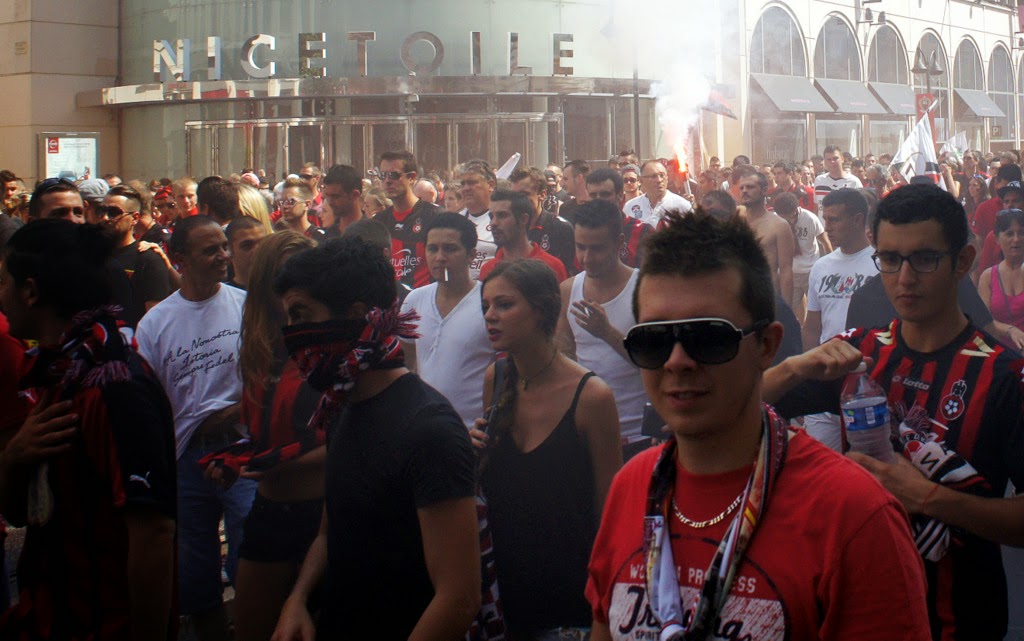 After being knocked out of the Europa League a few days prior, les Aiglons could not afford to disappoint the crowd again, especially not on this historic occasion. And they didn’t. In fact, they were impressive. Twice on top, Nice somehow failed to capitalise on the shortcomings of the visiting team, and having dominated for large parts of the game, ending it with two goals apiece was rather disappointing. Even more so when the first goal was due to a costly defensive error. Having said that, they did play well, and as a supporter it was something satisfying enough. The most important event of the day however only commenced once the final whistle was blown. The celebration of the closing of Stade du Ray. The club legends, including those who played in the 60’s, returned for a final goodbye.

As the Sun set, the fans were finally given the right to enter the sacred pitch. And thus, thousands made their way from the stand onto the green field, marking the end of a chapter of OGC Nice.

I’m neither French nor Niçois.
Heck, I can’t even speak French fluently, let alone Niçois.
I barely know this old, beloved stadium and the football club attached to it, yet I’ve come to really cherish both of them, and consequently the city of Nice.
For over twelve years I’ve supported Manchester United, watching them kicking a ball on a screen thousands of miles away from Old Trafford.
Now I’ve found a new team, much less popular than the Red Devils, but undoubtedly closer to home.
And for that reason OGC Nice mean more to me than its English counterpart.

“Amongst all unimportant things, football is by far the most important.”